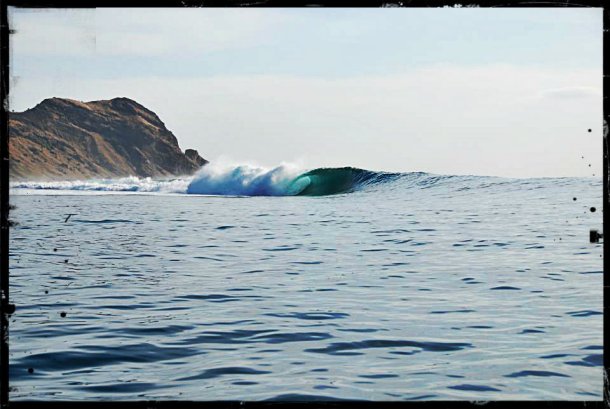 It’s been a little while since I posted on here as I have been very lazy!  In my defence I did have a big fat assignment to do for my sports nutrition course, but I am pretty sure moaning about the amount of work I have to do is unlikely to get me any sympathy considering the circumstances!

A lot has happened since I last wrote, so I will try not to prattle on too much and just get the main points down.

First of all, I have to mention my baby brothers wonderful wedding, which was the reason for our quick trip back home.  We had such an amazing day and it was great to catch up with all the family in one fell swoop. The bride and groom looked absolutely gorgeous (although Ian is clearly punching a little above his weight – see attached picture) and I am delighted to have Amy as my new-sister in law.  Congratulations guys! We were honoured to be part of your special day, me as a bridesmaid and Jim as the official driver of the Sambuca train and winner of the drunkest man competition. I was so proud! 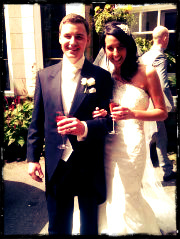 This time, on our way back to Indonesia we stopped off in Singapore for a week to get our visas sorted. Our friend Laura very generously put us up in her lovely apartment in Singapore City, so we were quite spoiled with 24 hour Olympic coverage to get us through the jet lag, a lovely room and access to her gym and swimming pool – thank you Laura!  The food was amazing and we had a great time eating our way through the town.  The highlight had to be the MASSIVE plates of chilli and pepper crab that Laura organised for us through a local hawker stall, it was incredibly messy, but SO tasty and the perfect end to our time there.

We have been back in Bali now for about 4 weeks and time is flying by, we are sorted with a new black (not pink…boooo) scooter and a place to stay for the next 5 months. We seem to have had a steady stream of friends around since we arrived, which has been great!

Most recently we met up with our friend Joe, who was over in Bali to do some surfing and diving. Tanya, Pip, Hannah and Lorne, friends of Joes, joined us in Padang Padang and so for a couple of weeks we had a little gang of English people to take over one corner of our usually Brazilian dominated hotel.

Joe introduced us all to a new card game called Quick Draw, which sounds fun, but is really a fast track to divorce. I won’t explain the rules, firstly because that would be dull, and secondly (and most importantly) because I don’t want to be held responsible for the breakdown in marriages/relationships across the UK that would certainly follow. We quickly discovered that the safest way to avoid all conflict was to play against someone else’s partner.  This avoids most of the shouting/yelling/swearing and also saves everyone from a three to four-hour row about aggressive hand slap tactics. A note for Lynne McCusker (soon to be Lawson…..eeek! exciting!): Having seen your competitive nature in action during what is now known as ‘The Pictionary debacle of 2010’, never EVER play this game. EVER. Trust me, it’s not for you!

For me having a group of girls around to sunbathe and chat with was amazing. For Jim however, this brought a whole set of new challenges.  Despite his best efforts, the word ‘shopping’ was brought up on a regular basis and before he knew it he was waving me off in a taxi with three women and my credit card.  Uh oh! Unfortunately, Jim has conditioned me not to shop and so I was pretty restrained and only bought the few items I needed.  Jim on the other hand, who only came into Kuta for an hour to meet us for dinner, managed to clear Rip Curl of most of its stock in one fell swoop (with encouragement from Pip and Tayna – Thanks girls!)  Can’t say I didn’t feel a little bit smug.  Remember the BUDGET Jim!

I was very sad when our friends left, we miss you guys!!! I can’t wait for new adventures next year!

Saying that, we are super excited about the arrival of Miss Dalton and Mr Simpson in ten days time, followed by Dave Williams at the end of Sept. Yey!! 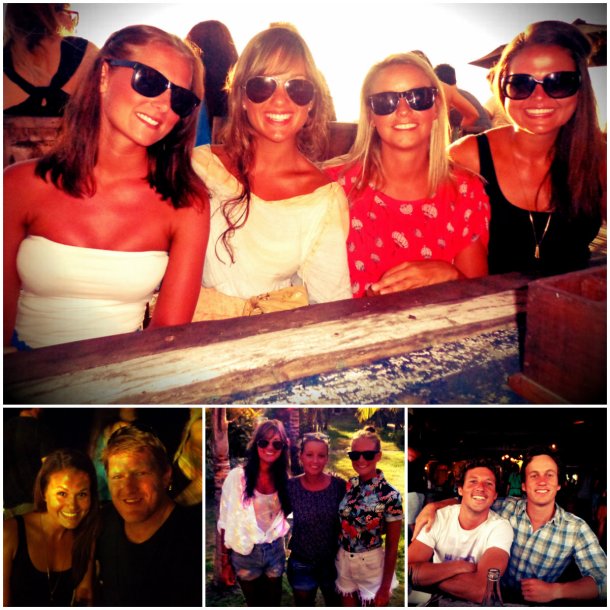 We have moved accommodation in the last week, leaving our lovely air-conditioned room in Ayu Guna, for a much cheaper place just a fraction down the road.  Some of you will know that we had planned to rent a house for the next 5 months as we thought it would be cheaper but we scrapped that idea when we discovered this place at a pricey £4 a night!  Our room is very basic but the bathrooms are clean, but we have an amazing view from our big balcony and it is a little like living in a tree house! Plus, the price means Jim is giddy happy, which is good for everyone (I haven’t told him about my shopping plans for the £6 a day we are saving on accommodation).

An added bonus of the new place is the people who are staying here. The rooms are rented out by Ray from Northern Ireland and Natalia from Russia.  They have both been in Indonesia for a few years and as such have been a great help, especially in Jims never-ending quest to save money.  Ray has shown us some local ‘warungs’ or cafes which are only a short drive away and serve the most amazing local food at a cost of 10,000 rupiah (or 70p) per person – imagine Jims delight! This has been a bit of a revelation as we have been a little wary of local places, mostly scared we will end up with a bout of ‘Bali belly’, but as Ray has tried and tested a lot of these places we have avoided this so far, touch wood!  Natalia has also been helped us out by putting us in touch with her language tutor who we hope to start weekly lessons with at the end of the month.  She does however, own a death trap (also known as puppy), who Jim is terrified of; despite the fact she has had every injection known to man.  She also has a cat, which I was caught stroking yesterday, resulting in a 20 minute lecture from Jim about fraternising with the local wildlife.

So, we have been in the tree house for 4 nights and so far so good.  We have only been woken up once, when one of the Aussie boys down stairs had a lizard land on his arm in the middle of the night.  He initially thought it was a rat but became confused when it wouldn’t budge off his arm.  He started screaming and jumping up and down trying to shake it off, which woke up his room-mate who thought he was having some sort of mental break down.  His room-mate then panicked and began screaming to Ray for help.  It all ended with everyone peering down at them to see what was happening, only to see them hugging each other for support due to their ordeal. Hilarious.  I did however, point out to Jim that if any sort of rat runs over me, I am going straight home. No questions.  Or maybe to the nearest five-star resort for a spa………….is that a rat I see?!

The last few days a so-called ‘mega swell’ has hit the island which means normal people like me stay away from the sea while the mental people go surfing in waves so big, just looking at them makes me want to cry.  This has resulted in a restless annoying Jim (as no surfing), but some amazing people watching opportunities.  Some of the WAGS that pitched up to watch the surfing are, quite frankly, AMAZING.  I have never, ever seen so many fake boobs in one place, but equally have never seen anything as amusing as people trying to walk on a beach in spike heels while trying to prevent their very short dresses from exposing more than they had planned. Comedy gold for me and quality perving for Jim.  Perfect!

Watching the surfing down at the beach has given Jim the opportunity to get a tan.  He isn’t one for sunbathing but given that we were down there anyway, he thought he would take advantage and give it a go.  Not being familiar with sunbathing, he made no attempt to move his shorts into a suitable position before the tanning process.  He now has a tan line half way across his stomach where his shorts rode up. Genius. I cannot tell you how happy this made me. Especially after the ribbing I got for the Brian O’Driscal comment (see below).

I am sure I am getting a bit boring now, so just a couple more things:

Jim: Finally has some reef cuts on his arm.  He is far too pleased about this.  I think he thinks it makes him look ‘ard.

Helen:  Reef cuts to: Thigh, knee, arms and soles of the feet. I am an idiot.

2.       Defence for the Brian O’Driscal Comment! (for those of you who didn’t see Jims delighted Facebook status update, I confused the Irish Rugby Captain, Biran O’Driscal ,with Brian Harvey from East 17…..)

In my defence.  I was taking about a guy that looked just like Brian Harvey (from East 17) and nothing like Brian Whatshisface.  Easy mistake to make, I say!

I hope everyone is well at home, my wobbly will power led to far too many Bintangs being consumed last night, so I am off to bed for a little snooze (Jim is already snoring beside me). Apologies in advance for spelling mistakes and poor sentence construction – I am still drunk. I will write again soon!